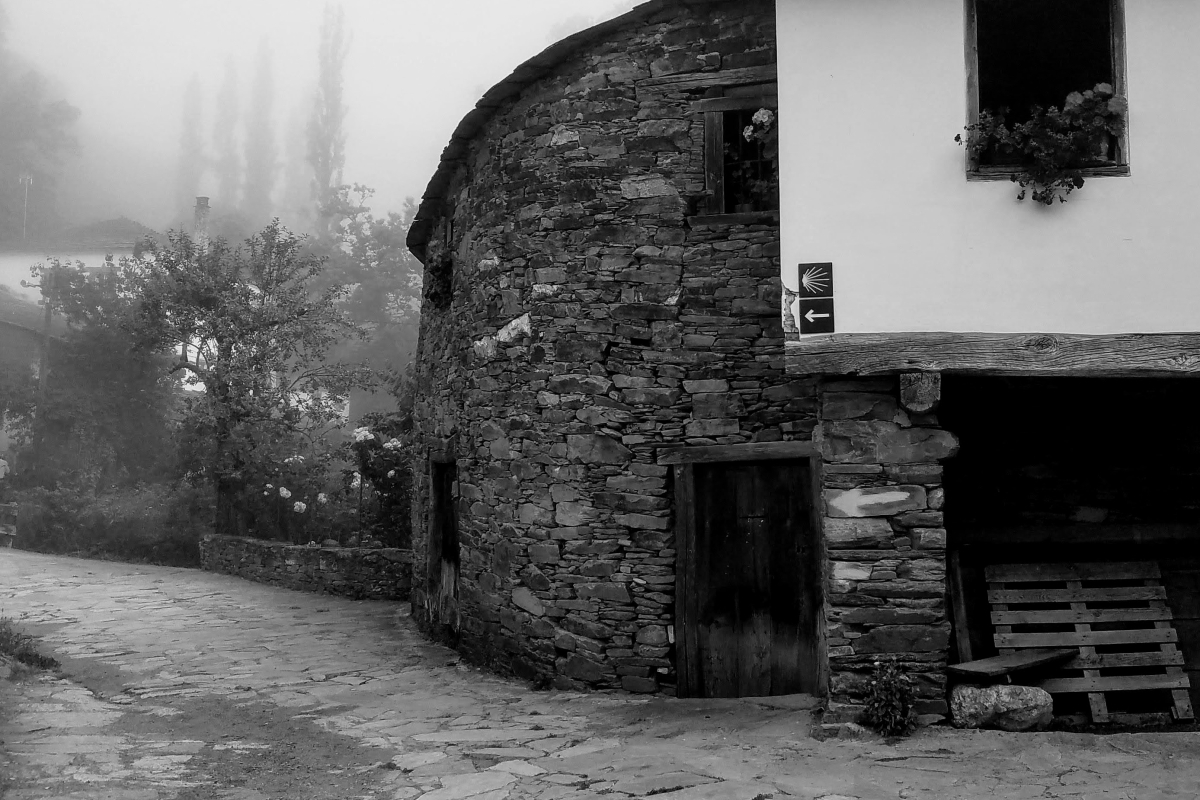 I received my credentials along with a pilgrim’s blessing at the Royal Parish Church of Santiago and St. John the Baptist in Madrid. I was officially a pilgrim.  I had not come to Spain planning to walk.  It was His plan, in His time.

I arrived by train in Pamplona on the feast of John the Baptist, June 24, 2019. I participated in the Pilgrim’s Mass at the Cathedral. That is where I met the first member of my Camino Familia, a pilgrim from Croatia. I will always remember him walking into a great hall of the church and belting out a Croatian marian hymn. It was a sight to behold.

Jose Maria, an exceptional volunteer, gave us a lovely tour of the cathedral and later, Father led a nice community time of sharing and prayer. This was so much more than I expected. I now felt like a pilgrim. 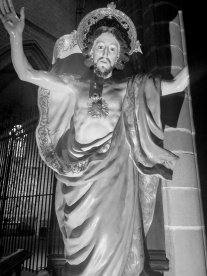 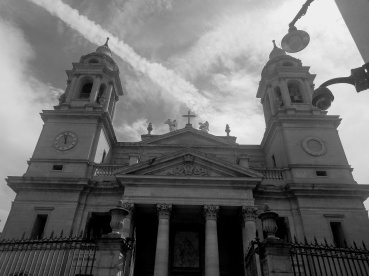 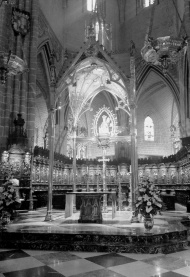 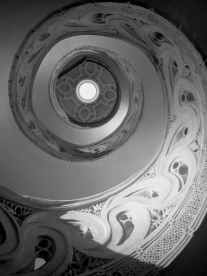 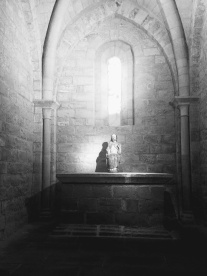 Later on I would learn, if you add rubbing your tummy to the smile, you will get the best chicken dinner you’ve ever tasted. That would be in Villamayor de Monjardin. Don’t worry; there is only one bar so you will find it. Unfortunately, it is only open- sometimes.

“We never shall know all the good a simple smile can do.”

Day One Walking: First up Mt. Perdon. And then, D O W N…Oh, the knees. My training consisted of walking from Decathlon to Decathlon in Madrid, trying to get the gear I needed for my impromptu, but long desired, pilgrimage on the Way to Compostela. I was hurting.

My hosts at the first alburgue were so gracious, even allowing me to pick cherries from their trees. And, dinner? AMAZING. The wine? So nice. The heat wave? Starting tomorrow… 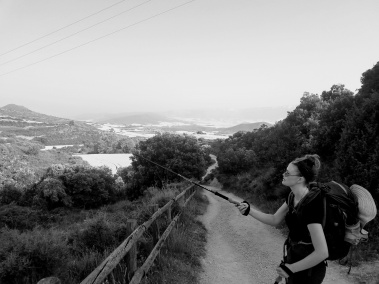 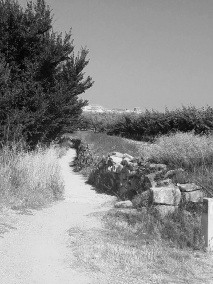 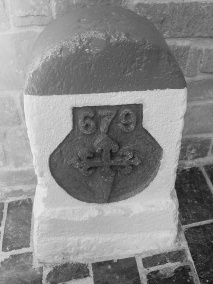 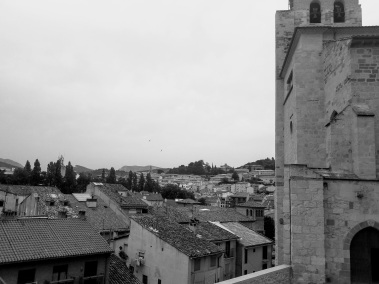 We attended the Pilgrim’s mass together at St. Michael in Estella.

San Miguel, my patron saint, has a fierce devotion to me. (I say that tongue in cheek but it must be said.) I try and return it in the same measure but I’m certain I will never quite match him. It was so special celebrating mass here, receiving the blessing from Fr. Michael who shares devotion to our namesake.

Fr. Michael gave the pilgrims a holy card with the Pilgrim’s Prayer to our Lady of Rua printed on it. I carried it with me, trying to pray it everyday. By the time I arrived in Santiago it was so worn that it looked nearly as old as some of the churches along the Camino.

After the blessing it was time for tapas and cervezas. As the Red Hot Chili Peppers played, I had to remind myself that I was in Spain. The baby eels on the little plate helped with that. Topic of the night? What else, US politics.

As I passed the multitude of churches along the old pilgrim route, I made the practice of kissing each door as a little sign of my love to the Presence who may be inside. Just a small act of devotion for so many graces.

Yes, the heat wave arrived. The pilgrims I was privileged to walk with are survivors. We walked the meseta- think Death Valley- while temperatures scorched Europe, reaching 44° C. Translated into American? Just over 111° F. Maybe it got hotter. I wasn’t keeping track. I am thankful to the bartender in the village that gave me gazpacho. I’m certain it saved my life. Gracias.

The pilgrims from LA I met walking the meseta were thinking of leaving and going to Scandi. I get it. No judgment here. The American mom with her young daughter was thinking Ireland. Smart move. I hope they made it to the wine fountain first. The vino is not bad at all. Salude.

Pilgrims who had started in St. Jean had three days on me: three extra days of blisters, injuries, and exhaustion. How happy we were to arrive at an alburgue that offered us foot baths and a laundry spinner. The hosts even let me join them for the ride straight up a jaggedy dirt road, to an old fortress. Their ministry to pilgrims was so appreciated but how it saddened me to hear them say “that they were the only thing spiritual on the Camino” when Christ Himself is present; waiting for hearts with humility to be open to sweet communion in the Eucharist. 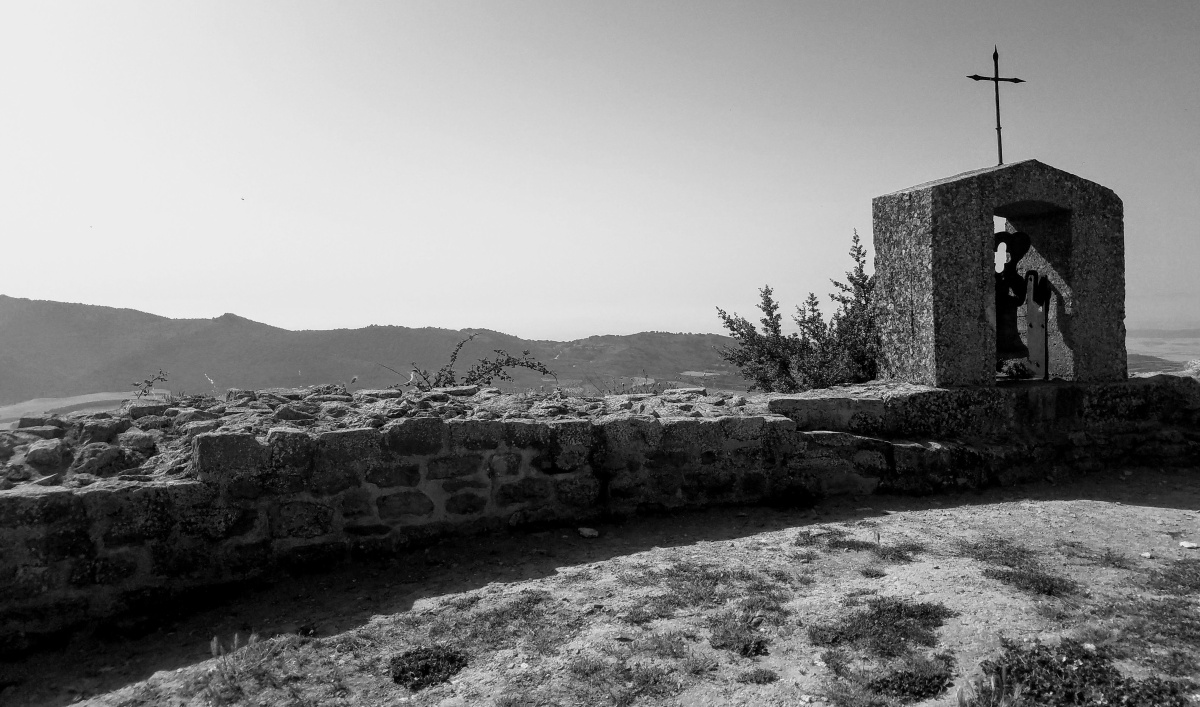 Walking to Logroño on a Sunday afternoon with new boots two sizes too big; so much better. Left the old boots on the church steps with the hope that they could go to someone who needs them. Met a pilgrim from Moldova who sang the Beatles. All You Need is Love became the simple truth of the Way. And so began The Camino Playlist.

Just before Logroño, lining the Camino, are fruit trees. A local woman was gathering the cherry like fruits. When I asked what they were, the kind woman filled her second bag with half of what she had gathered- and gave them to me! So kind and generous was her heart.

Heart of Gold by Neil Young

“I’ve been a miner for a heart of gold…”

I didn’t think my feet could carry me any further- but it was Sunday- and I needed to make it to mass so I kept going. In Logroño, waiting for the Moldovan pilgrim, was a pilgrim from India, a Catholic priest, who the Way brought into my pilgrimage as a shepherd while I was so far from my shepherds at home.

Another one added to the playlist: Shed a Little Light by GoldFord.

I told this pilgrim priest that I needed to go to mass and he walked me to the Cathedral. Mass had just begun. Elated, I opened the door with my pack still on my back- a hot mess- and not caring! Thankfully, the pilgrim priest checked the mass schedule, looked at me and decided that we would go to mass that evening. Now it was time to get a bed. And then, food! 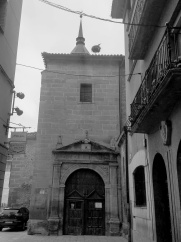 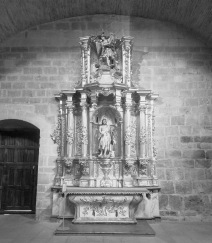 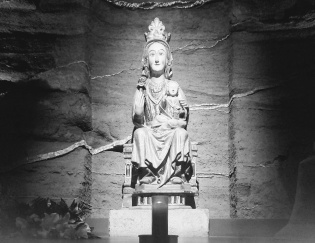 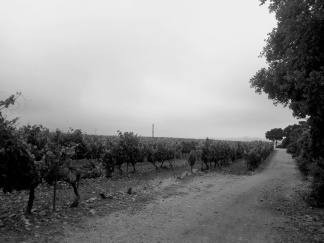 Felt so blessed to be able to help prepare the pilgrim’s meal at the alburgue; yes, there were too many cooks in the kitchen, but in the end many hands made light work. The food was delish! Mass was lovely too.

Add to playlist: Kenny Chesney’s Get Along.

The ringing of the old church bells calling the faithful to prayer- what a memory. When I heard them ring, I would run fearing that I would miss the celebration. I learned I typically had 15 minutes to get there. So thankful to be able to pray vespers with the sisters at the monastery. Beautiful sweetness.

Loved Santo Domingo. The mosaics in the crypt are muy bonita. Such a nice pilgrim’s mass. Realized I left some clothes in Logroño. Checked a local store for some new hikers. €65. Ouch. Made the decision that I would get by with the one pair of hiking pants I had, save my money and wait to buy something I loved. Best. Decision. Ever.

Gloria by U2 added. 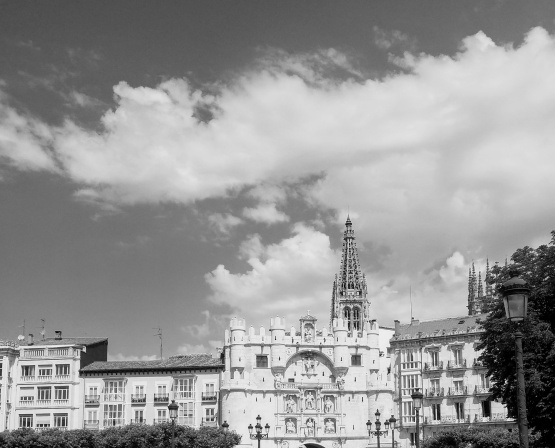 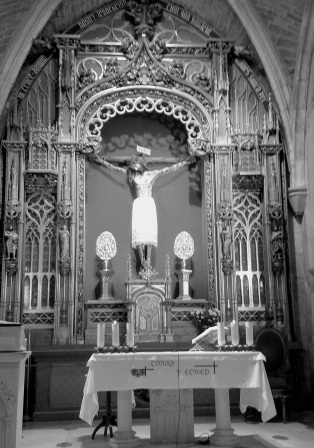 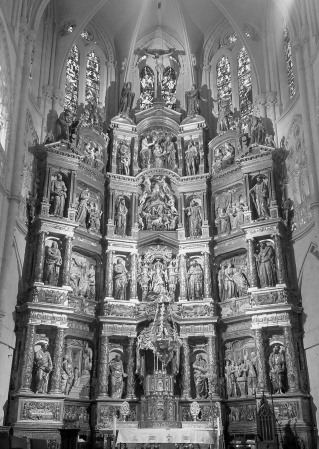 Walking into Burgos I met the first of the LA ladies. Kelly and I connected right away as we could relate to situations we each were going through. We soon caught up to her friends, Becky and Sylvia. We would meet each other walking many times over the next three weeks. Love the LA ladies. And, the Burgos Cathedral is amazing.

Met up with the Croatian pilgrim I met the first night in Pamplona. So surprised as he is a giant and I walk at the speed of the snails because of my asthma. As we were talking about the Good Shepherd and the 23rd Psalm, what should approach us? Yes, shepherds leading their sheep down the Camino! Seriously, Providence. It is true, the goats seperate themselves from the sheep. It is their way not the way of the shepherds.

Darko and I continued on our Way, reciting, “The Lord is my shepherd, I shall not want, He leads me,” taking turns in each of our own tongue. Pretty magical. We soon parted ways. I am as slow as the snails.

Add to playlist: You Say Goodbye, I Say Hello. 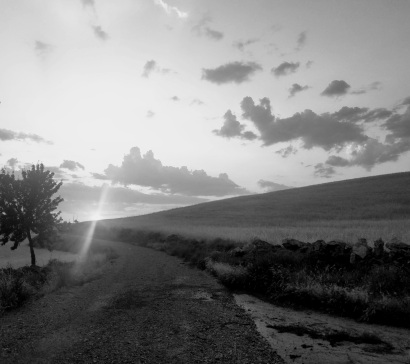 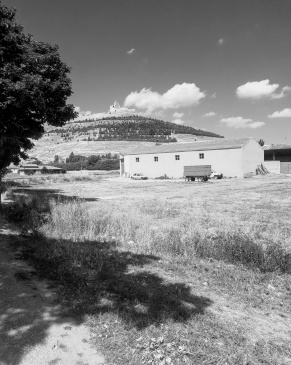 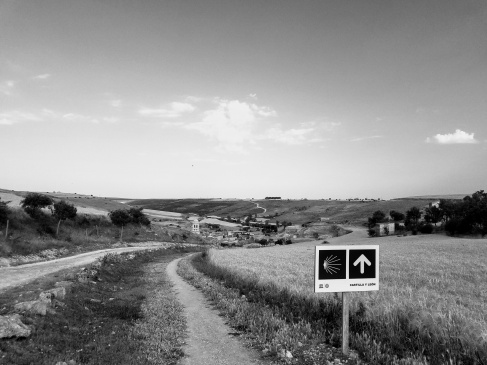 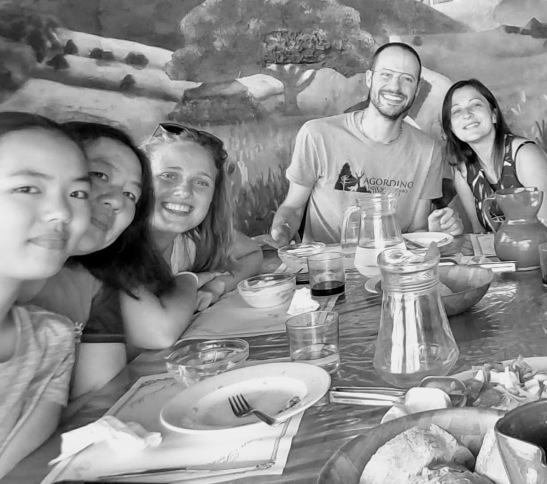 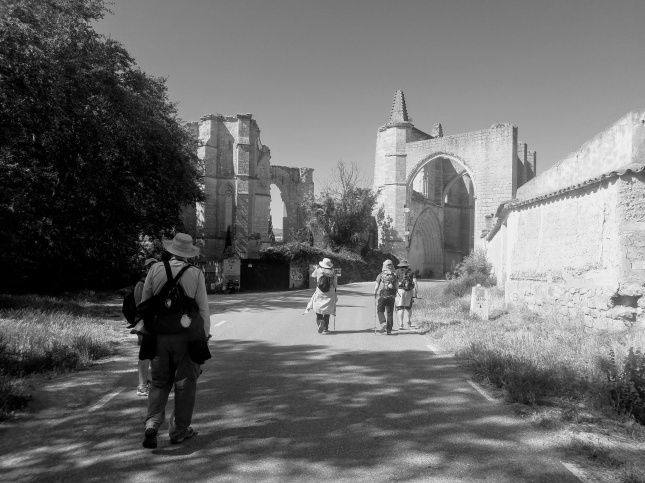 So how is it being in a foreign country on the Fourth of July? Honestly, hard. After another scorching day, I’ll I wanted was a bacon-blue burger, watermelon, potato salad and a nice local brew in my hand. I wanted to kick back, watch the fireworks exploding across the sky, while Don Henley’s, American Pie looped in the background.

Give me some little American cuties turning cartwheels with their red, white and blue ribbons twirling like sparklers from their pigtails, while their older brothers are taunting them with snakes caught by the creek; the TNT poppers exploding at their bare feet. Give me that, and I’m good!

While there was a place to kick back with a beer, the open field behind the albergue remained vacant of exploding stars in an American anthem.

The church bells called the village to mass and I went running. There was even a sing-along where every country was invited to sing a song important to them, but everytime I suggested, God Bless America, it was nixed. Another tradition missed. How ’bout, Immaculate Mary?

North American that is.

I checked the store for hamburger. None. Although interiorly sullen, I kept my American chin up and enjoyed the paella along with the company of the Chinese, Italian and French Canadian pilgrims at the dinner table. The next day, Tom Petty’s, American Girl was added to the Camino playlist.

“Well she was an American girl, Raised on promises, She couldn’t help thinkin’ that there, Was a little more to life, Somewhere else, After all it was a great big world, With lots of places to run to, Yeah, and if she had to die, Tryin’ she had one little promise, She was gonna keep………She was an American girl.”

Well, the sun still rose the next morning and it wasn’t long (just 15 km) before this American girl was biting into the largest, sweetest slice of watermelon she could remember. It tasted so good under the shade.

While the scroungy dog listened intently to his master, the watermelon vendor shared his verse with the pilgrims resting at his establishment; a poem he wrote about el Camino. It was recited in Spanish. After all, this is Spain.

One by one, the other items I missed so much; la hamburguesa, la ensalada de papa and los fuegos artificiales, would come to me as I continued my Way…

Look at the birds in the sky; they do not sow or reap, they gather nothing into barns, yet your heavenly Father feeds them. Are you not more important than they?

Hey, thanks for checking in! Part 2 is coming soon. So subscribe. Also, what do you think? Share your thoughts below. Cheers!

3 thoughts on “Santiago de Compostela: An American Tale of the Way, Part 1”